After a 9-Week Gap, Google Updates Its Panda Algorithm with Version 3.2 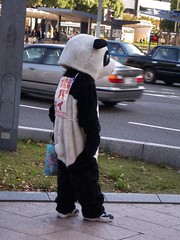 There are confirmed reports of a new algorithmic update by Google, termed as Panda 3.2. The last Panda update (3.1 version) happened on November 18, 2011. So, Panda 3.2 is the first in line this year. Though Google says it was a minor update (merely data refresh), webmasters are pointing out both losses and gains in their search engine rankings.

Yes, it’s been nine weeks since Google updated its Panda algorithm last. Though rumors spread about a new Panda update during the holiday season, Google tweeted that no major Panda update will happen until next year (i.e. 2012), a holiday present to webmasters in a way.

Wait, What’s a Panda Update?
The Google Panda update derives its name from Navneet Panda, a Google engineer (a Ph.D. in computer science from the University of California, Santa Barbara) who made the entire Panda thing possible.

Google Panda is based on an algorithmic update that utilizes artificial intelligence (AI) to differentiate between wheat (high quality sites) and chaff (poor quality sites). During a Panda update, human quality testers grade hundreds or thousands of websites in terms of quality, design, time on site, website speed etc. Previous ranking factors like PR (PageRank) have, therefore, been sidelined. Google Panda updates usually occur at the interval of every 5-7 weeks.

Panda Updates That Have Happened So Far
Google announced its first major Panda algorithmic update in the month of February last year. Since then, it’s updated the Panda ten times, 9 in 2011 and 1 this year. Let’s have a look at all of these updates.

Webmasters can expect many more updates this year, whether minor or major. Google plans to implement as many as 500 changes to its ranking algorithms every year. And Panda 3.2 (the latest one) is only one of them.

What Google Aims to Do via Panda Updates
Good quality and bad quality content continues to appear all the time. What the Google Panda, therefore, aims is to provide people with the most relevant results (solution) to their queries (problems). Most of the algorithmic updates are barely noticeable. However, Panda updates are pretty prominent. And webmasters can notice them as soon as they evaluate their website statistics.

Creating a healthy web eco-system is Google’s top priority. When major improvements are made, low quality sites lose their rankings while high quality sites start appearing at the top of search results. Google strives to deliver high quality content (pulled in from wonderful websites from across the world) to users as they enter queries into its search engine. In short, a Panda algorithmic update is an excellent way to reward websites that produce valuable content.

Was your website hit by one of these Panda updates? Please feel free to share your opinions on the topic.